Can I Bless This Month For You ? – If Yes Click HERE – Pastor Alph Lukau Wants to Pray For You If You Are Online ??? 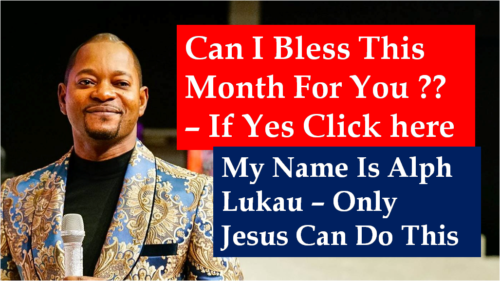 
Declare;
The Lord has chosen me, I am the one, the choice of the Lord.

16 Now the Lord said to Samuel, “How long will you mourn for Saul, seeing I have rejected him from reigning over Israel? Fill your horn with oil, and go; I am sending you to Jesse the Bethlehemite. For I have provided Myself a king among his sons.”

But the Lord said, “Take a heifer with you, and say, ‘I have come to sacrifice to the Lord.’ 3 Then invite Jesse to the sacrifice, and I will show you what you shall do; you shall anoint for Me the one I name to you.”

4 So Samuel did what the Lord said, and went to Bethlehem. And the elders of the town trembled at his coming, and said, “Do you come peaceably?”

5 And he said, “Peaceably; I have come to sacrifice to the Lord. Sanctify[b] yourselves, and come with me to the sacrifice.” Then he consecrated Jesse and his sons, and invited them to the sacrifice.

6 So it was, when they came, that he looked at Eliab and said, “Surely the Lord’s anointed is before Him!”

7 But the Lord said to Samuel, “Do not look at his appearance or at his physical stature, because I have [c]refused him. For[d] the Lord does not see as man sees; for man looks at the outward appearance, but the Lord looks at the heart.”

And Samuel said to Jesse, “Send and bring him. For we will not [e]sit down till he comes here.” 12 So he sent and brought him in. Now he was ruddy, with [f]bright eyes, and good-looking. And the Lord said, “Arise, anoint him; for this is the one!” 13 Then Samuel took the horn of oil and anointed him in the midst of his brothers; and the Spirit of the Lord came upon David from that day forward. So Samuel arose and went to Ramah.