Finally, a new online gambling crypto-currency that is trusted globally 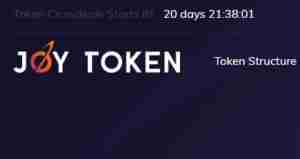 Developing games in the gambling industry can be a difficult and lengthy process; especially when confronted by a low revenue share, regulatory requirments and integrating your games in the big game providers backend.
The larger game developers have their own in-house game development teams and tend to use only a handful of independent game developers, leaving the smaller independent developer with limited access to this ever-growing market.

Likewise the end users (game players) miss out on potentially exciting new games and must trust online casino operators who offer little transparency to their players.
Additionally, the current business model of traditional developers isn’t reaching all potential players; particularly millennials who want more from their gaming experience; including financial anonymity, trust and transparency.
JoyToken is here to address all these.

JoyToken is committed to deliver smarter games to existing and new casino players by giving innovative and creative games developers easy access to operators in our one stop solution. JoyToken delivers this in four easy steps:
All this is done using JoyToken, a new and unique Cryptocurrency that will enable developers to pay and be paid for their games, while also enabling end users (players) to play Joy Gaming games on PlayCosmo and ultimately many other sites.
And naturally JoyToken will benefit from Blockchain technology and thus transparency. This last point is the most exciting as this has not been done before and will open up a new market of potential players, who want Trust, Anonymity and total Transparency; all of which is delivered through Blockchain Technology.